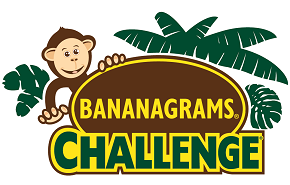 For several years, we've been delighted to received two free Bananagrams sets and Year 5 and 6 have competed in the Bananagrams Challenge to become our 'Top Banana'.  Each year, the four classes held preliminary rounds to establish the top eight players in each class.  With the top eight players chosen, the competition began with 32 children, lots of spelling discussion and much dictionary searching.

This year, Bananagrams have created a school club and children from Y4 to Y6 are enjoying playing at a lunchtime club.  Bananagrams is a hugely entertaining and versatile word game that can be played in different ways with a different number of players - visit the Bananagrams website to find out more!